Horror is such a fun and unique genre. There’s nothing quite like a good scare every now and then. Plus, There are so many elements of horror to appreciate, like the monsters, the gore, the eerie tone, the jump scares, the psychological terror that haunts your dreams, and so much more. What makes a truly great horror movie, though, is the ability to tell a great story while creating that sweet nightmare fuel. That’s something that author Stephen King typically excels at. The latest two-part adaptation of his work, IT and IT: Chapter 2, has hit theaters with the first half premiering in 2017 and the second releasing almost a month ago. It’s certainly worth looking into whether these recent horror flicks tell that necessary immersive story, or if they’re just a bunch of jump scares.

Because IT and IT: Chapter 2 are essentially two halves of one film based on one single novel, this review will be for the two films as one whole.

Being scary is obviously the most important factor in a horror film, and IT does not disappoint. These movies are absolutely terrifying. They offer horrifying jump scares and nightmarish psychological horror. It blends both types of scares seamlessly for an extremely fun and scary experience. Some of the horror is more subtle, like Pennywise taking the form of wall graffiti in the background to stalk the main children. This subtle horror creates a feeling of dread even during the calmer, dialogue-heavy scenes.

The incredible horror effects help make the movies that much scarier. There are both traditional gore effects and CGI monsters used throughout, and they are mostly impressive. They add a sense of discomfort and realism at the same time. Plus, the makeup for Pennywise is rather unsettling. It’s put together well, but there’s something “off” and vaguely inhuman about it.

The acting is all around tremendous with a talented cast including James McAvoy, Jessica Chastain, Finn Wolfhard, Bill Hader, and more. The most impressive performance was given by the creepy clown himself, Bill Skarsgard. His stellar acting and voice work truly sends a chill down one’s spine. Both adult and child actors had the challenge of acting as single characters during different points in their lives, and they absolutely succeeded. Bill Hader and Finn Wolfhard both look and feel exactly like the same character, Richie. The same goes for the rest of the cast.

As previously stated, the best horror movies also offer good story. IT does just that. Throughout both films, there is a beautifully thought-out story about a group of friends and the struggles they deal with throughout their lives. The members of the Loser’s Club all feel like real people who you’d meet in your life. By showcasing their personalities, their desires, their fears, and their struggles, the movie becomes so much more realistic and immersive. Having characters and a story that you care about adds to the horror because you fear for what might happen to them. Other horror movies that just focus on killing random teens are fun, but thy don’t always make you feel scared for the character like IT does.

Through the hardships faced by the Loser’s Club, whether it be domestic abuse, being bullied, or guilt over a lost loved one, we see the horrors of real life. There may be a magical clown demon haunting these kids, but we also get a glimpse of very real monsters that we may face in our lives. IT makes you think about the horrors you have faced or may face in the future, creating a lasting fear when the movies are over. 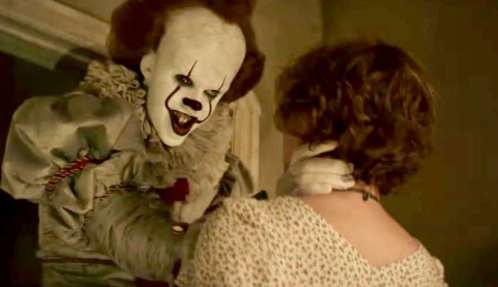 Even though the Loser’s Club is our main cast of characters that we primarily see targeted by Pennywise, we also see him kill other victims around the town of Derry. This is an extremely important detail, as it’s what would have happened if the movies were real. Plus, it creates the threatening idea that no one in Derry is safe from Pennywise.

The filmmakers accomplished something that can often be almost impossible to pull off in a horror movie. They were able to have witty humor throughout the films without it taking away from the fear or drama elements. The movies also never felt like a horror-comedy at any point. The scene in Chapter 2 when Richie and Eddie are faced with three doors; Scary, Scariest, and Not Scary at All; has a hilariously misleading pomeranian behind one of the doors that leads to a great jump scare. It’s then followed by a hilarious line about what they should choose “next time,” as if they would experience this another time for any reason. There were funny moments and scary moments, but they never took away from each other.

The directing is especially well-done in these movies. There are shots, like the extras swaying back and forth in the background as Pennywise taunts adult Richie, that create a strong feeling of discomfort. There are also clever uses of color and lighting in both movies that make the scene feel more unsettling.

Adding to the films’ cleverly crafted story, there is an interesting message about standing up to one’s fears and obstacles. It feels similar to the “stand up to the school bully” messages seen in old Saturday morning cartoons, but for adults. It makes one consider how they should face their hardships in life, even as an adult.

There are some scenes, like the opening minutes of Chapter 2, where it’s so dark that it’s hard to see what is happening on screen. When Mike is walking down by the river to find the popped red balloon, I had to squint to see what he was looking at.

The bully story line is vital to the Loser’s Club’s story when they are children, but when they are adults, it’s barely a distraction. There was definitely a missed opportunity with the bully character in Chapter 2. He didn’t feel like he posed as much of a threat as they made him up to be. I get that they wanted to use him as a more relatable, human threat, but he just sort of shows up, they fight him, and kill him. It was interesting to see something from their past coming back to haunt them, but it should have had a little more time dedicated to it to feel more impactful.

Most of the special effects look great and genuinely terrifying. However, there are some instances where the CGI is noticeable enough to break immersion, taking away from scenes that could have otherwise been a lot scarier. The severed legs walking toward adult Richie and Eddie looked more awkward than scary.

2017’s IT may have left the story open for the second half, but it was still a solid standalone film. IT: Chapter 2, however, is absolutely not. Seeing the first half is required to see the second, otherwise the movie will be confusing and the beginning scenes will feel awkward. That being said, they were meant to be seen together, which is why this review is for both films together. It just makes for a very long and tiring viewing experience because of it.

There is a cameo by the novel’s author, the legendary Stephen King. King plays the shop keep at the thrift store where Bill finds his childhood bicycle. King has cameoed in some other movies based on his books, so it would have felt a little strange for it to not happen in an adaptation this large-scale.

One of the creepy features of Pennywise is his eyes crossing and uncrossing. That’s not a trick or any sort of movie effect. That’s something that the actor, Bill Skarsgard, is actually able to do. I bet he creeps out a lot of his friends with that.

This isn’t the first time Stephen King’s IT has been adapted for a visual media. In 1990, there was a TV mini series based on the novel featuring Tim Curry as Pennywise. It’s more on the campy side, but the acting is great and it’s overall iconic and remembered for its own reasons.

IT and IT: Chapter 2 make for a long, tiring viewing experience, but it’s worth it. It finds the perfect blend of being scary while telling a great story. As a result, it’s a lot of fun and earns a large amount of re-watchability. The movies are at their strongest when they focus on the friendship between the members of the Loser’s Club, along with the struggles they face as individual characters. Having such relatable and interesting characters to care and fear for adds a whole extra layer to the horror. IT and IT: Chapter 2 are a must watch for anyone regardless of how much of a horror fan you are. I’m excited for the blu-ray release of IT: Chapter 2 so that I can experience watching both back to back as one full story like they were meant to be.