Biopics have the difficult task of relaying facts while also telling an entertaining story. They can be a fun way to step into the shoes of those with lives very different from our own for a couple of hours and learn about a person’s real experiences. Most of the best biopics manage to teach us lessons about life by using the lives of others as an example. The most recent major biopic, Rocketman, tells the story of music legend Elton John and the many struggles he has dealt with throughout his life. Let’s discuss whether Rocketman soars to success or if it fails to take off.

Rocketman has a whimsical nature to it. Although the movie is based on a real story and is grounded in reality, the filmmakers managed to provide a sense of surrealism throughout. There are moments, like the audience at Elton’s first concert floating in midair as he levitates at his piano or Elton seeing his younger self playing piano at the bottom of a swimming pool, that show us how the characters feel during the story. The overall use of visual metaphor, like Elton wearing a flamboyant devil costume at the lowest point in his life, makes this film stand out from most other biography movies.

Taron Egerton is the perfect choice to play Elton John. Not only does he give an outstanding performance as the pop icon, but the makeup and costume designers were able to easily make him look the part as well. Egerton’s energy completely controls the flow of the movie. Each of the other actors in the film are just as great. Their performances suck the viewer into a truly immersive experience that make you feel sorry for some characters, angry toward others, and every other emotion in between.

Not only is Rocketman a biopic, but it’s also a bit of a musical using many of the musician’s iconic songs. The musical sequences are absolutely spectacular. They are well choreographed and tell a story through Elton’s famous songs. Each one matches the exact energy that is meant to be portrayed at that point in the film. The song choice for each scene is extremely clever. Instead of showing the song being written or performed at the point in Elton’s life when they were created, the songs are brilliantly used during the parts of Elton’s life that inspired each song. We see him perform “Saturday Night’s Alright for Fighting” a very long time before he even wrote music because it was when he’d see a lot of bar fights where his mother took him to perform as a child. The movie consistently follows this pattern throughout, and it stands out from any other musician biopic because of it.

The story is successfully told in a way to make the viewer truly feel for Elton. You are on his side for the whole movie and fight for him to pull through his issues. The filmmakers did a fantastic job with showing us Elton’s struggles with depression, relationships, drugs, and alcohol. His journey to be loved in the right way and to learn to love himself are portrayed wonderfully. It definitely makes one see him for the tortured soul he is and how he got to be that way, and want him to find the happiness he works so hard to achieve.

Throughout the story, there is an underlying theme of identity. He is constantly faced with questions about who he really is. We see this with him choosing to go by Elton John instead of Reginald Dwight, the costumes he wears on stage to express himself, how he comes to terms with his sexuality, and how he chooses to act toward those he cares about. There’s a scene where his close friend asks him why he wears such silly outfits on stage and says he should just be himself. Elton replies with something along the lines of “This is who I am.” At the time, it’s who he thought he needed to be in order to be loved. During the scene where Elton sees his younger self on the bottom of the swimming pool, he is looking at the person he once was and wishing he could be that again. Moments like these throughout the movie beautifully showcase Elton’s struggle with his identity and causes the viewer to think about who they truly are and how they express that to others. It certainly adds a lot more emotion to the story.

There are points during Rocketman where characters who are vital to the plot and to Elton’s life are introduced, but it is difficult to know who they are. They don’t say their name much, if at all. For one character in particular, it was a challenge to figure out his relationship to Elton. He could have been another songwriter, an agent, or a representative of a music label. It took some web searching in order to figure out who it was they were portraying.

In real life, Elton struggled with weight issues. He even mentions it early in the movie. However, it’s not portrayed as well as some of his other struggles. It appears that they wanted Taron Egerton to really gain the weight rather than put him in a fat suit, but he was unable to gain the right amount of weight. It’s not a huge issue by any means and does not hurt the plot. It’s just noticeable in certain scenes.

The movie may do a great job showcasing the struggles experienced by Elton John, but it neglects any high points or happiness in his life. I obviously don’t know Elton John personally or how he feels about anything, but I imagine the person who wrote the songs for the Lion King has had some fun in his life. Seeing one or two of those happy moments in his life could bring the story to life even more.

At the end of Rocketman, we are told via text appearing on screen that Elton eventually met his husband who loves him in the right way. I feel like that is something we should have actually seen rather to just be told about. A large part of Elton’s journey in the film is finding someone who loves him in the right way, so the payoff would be for us to see him find that, but we don’t. The movie ends before he meets his husband. I get that it would have made the run time longer, but I wouldn’t have minded if they ended the story later in his life, like showing him getting knighted or meeting his husband, because that’s when the payoff for all of his struggling comes in.

Taron Egerton and Elton John have starred in a movie together before (Kingsman: the golden Circle), and now Egerton is portraying his Kingsman costar in a movie about his life. That must have been a pretty unique experience that most people will never get to do.

Taron Egerton (as Elton John) has a musical number in Rocketman where he sings Elton’s hit “I’m Still Standing.” I found this pretty funny considering Egerton performed this exact song in another movie; Illumination’s Sing. In the movie Sing, Egerton voices a gorilla named Johnny, and his big song in the film is Elton John’s “I’m Still Standing.” It’s certainly a funny coincidence. 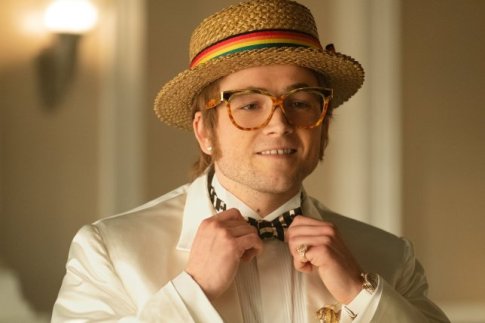 The very end of Rocketman shows us side-by-side comparisons of characters, costumes, and more of how they looked in real life and in the movie. It’s impressive to see how well the filmmakers were able to recreate everything.

Rocketman may have some flaws here and there, but most are very minor and do not hurt the otherwise extremely entertaining retelling of Elton John’s life and career. The cast are all-around amazing with Taron Egerton excelling as Elton John. The musical sequences are a true spectacle. The film radiates a sense of surrealism and whimsey, which is hard to do with a truelife story. Rocketman is fun when it needs to be but still manages to pull you in with real emotion toward the character of Elton John and his many struggles. Plus, it made me really want to listen to Elton John’s music a lot more.