The latest Batman film unfortunately had to cease filming because of COVID-19, but Warner Bros. and director Matt Reeves were thankfully able to slap a trailer together with some of the footage they managed to get so far. This Batman flick will be completely separate from the DCEU and will focus on a Year Two storyline. The trailer, which was released on August 22nd during DC’s FanDome livestream event, caught a lot of fans by surprise and certainly packs a punch. Let’s investigate this first trailer for 2021’s The Batman.

The trailer starts with someone whose face is wrapped in tape wrapping up the face of what appears to be a murder victim. This is likely the Riddler, or someone who works for him, considering we see there is a riddle left at the crime scene.

Jim Gordon (who is not the Commissioner yet in this story) reads the riddle left at the scene. The card reads “What does a liar do when he’s dead?” There are symbols also written out on this card that someone on the Internet has ALREADY deciphered. The answer to the riddle is “He lies still.” Each letter corresponds with one of the symbols, which might prove handy when trying to figure out other riddles in the film. I gotta say, the green envelope and scratchy hand writing are rather fitting of the Riddler.

There are newspapers hung up at the crime scene that contain headlines such as “Don’s Done It Again” and “Carry on Don.” These articles are written about Mayor Don Mitchell Jr., which may indicate who the murder victim is. “LIES” is graffitied over the newspapers, while “NO MORE LIES” is painted on the victim’s taped-up face. Someone clearly wasn’t happy with something the mayor lied about. 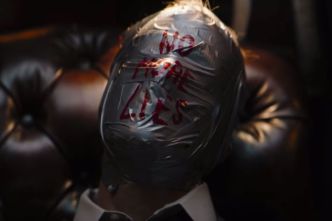 Another newspaper heading seen in a different shot at the crime scene reads “Maroni Drug Bust!” Salvatore Maroni is one of the major crime bosses in Gotham City. He’s also famous for being the criminal who throws acid at Harvey Dent, transforming him into Two-Face. We already know that Carmine Falcone will be in the movie played by John Turturro, so we may be able to see multiple major mob bosses at play.

After reading the riddle out loud, Jim Gordon tells Batman that it’s for him. Batman then emerges from the shadows and we get our first full glimpse of Robert Pattinson’s Batsuit. This take on the Batsuit looks armored, similar to the Arkham video game series. One of the most interesting details is the bat symbol on his chest. It appears to be made out of parts of the gun that was used to murder his parents when he was a child. On one hand, it’s a cool detail and adds an emotional connection to what he’s wearing. On the other, the bat symbol doesn’t have a head and is just wings. Using a headless bat symbol is certainly a bold choice.

Alfred, played by Andy Serkis, tells Bruce that he’s “becoming quite the celebrity.” News of this mysterious Batman who’s been kicking crime’s butt must be surfacing more and more now that he’s been at it for about two years now. It’ll be intriguing to see how the world responds to all this buzz.

The next scene shown in the trailer has a car driven through a crowded church during a funeral. Bruce pulls a kid out of the way, proving that he’s also here to protect and not to just to beat baddies to a pulp. The car’s driver appears to be a victim himself, as he has a bomb strapped around his neck, a Riddler envelope taped to his chest, and his mouth is taped shut with “LIES” written across it. A smart phone is strapped to the man’s hand, so the Riddler, or whoever else is responsible, apparently did all this to speak with Bruce or someone else at the funeral. The vehicle also has writing on it that reads “D.O.A.” which typically means dead on arrival. This is likely a threat of sorts.

The funeral looks to be for the mayor who was killed in the trailer’s opening scene. Even after he was killed, the people in his life seem to still be a target. Either that, or the killing of the mayor and the theatrics at his funeral are all to send some sort of message.

The trailer then gives us our first look at Selina Kyle, played by Zoe Kravitz, who is a burglar before she is the Catwoman we know her to be. Her ski mask disguise has points on the end, resembling cat ears. This makes for a fun little detail. These brief shots of Selina makes one wonder what she is breaking into and what she is after.

The next scene in the trailer takes place at City of Gotham Sanitation, which, in the classic comics, plays a large role for minor-yet-memorable Batman villain Rat Catcher. Rat Catcher worked at City of Gotham Sanitation before becoming a criminal. This facility could also be a front for one of the many mob bosses in Gotham, like when Two-Face used Gotham City Waste Removal to carry out dirty deeds and secretly remove dead bodies.

This scene leads to our first brief glimpse at Colin Farrell as the Penguin. The makeup on the actor is so magnificent that he is completely unrecognizable. The makeup department working on the film absolutely outdid themselves with how accurate they made him look compared to the comic book source material. Perhaps we may see him with a monocle at some point in the movie. 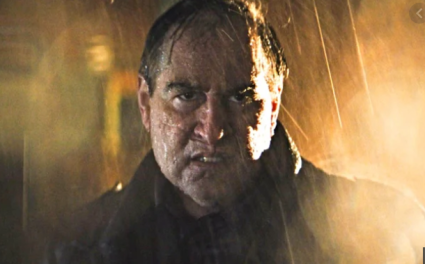 The gangsters and goons in this version of Gotham City, like in all versions, seem to enjoy standing out from actual gangsters and goons. In Batman Forever, the gangsters are covered in neon glow-in-the-dark paint. In the fifth season of Gotham, we see the first live action version of the Mutants gang from The Dark Night Returns who all wear Star Trek-esque visors. Here, it appears the common criminals don skeleton makeup for no apparent reason. It’s silly, but it’s something that makes Gotham what it is in most versions. It’s good to know that even though this is a different take on Batman, it still feels like Batman.

A voice over says “If you are justice, please do not lie.” Is this being said by the Riddler? Whether it’s him or someone else, someone in this film strongly dislikes lying. The voice over then continues with “What is the price of your blind eye?” This might indicate that someone was paid off to ignore some illegal or harmful deeds.

The trailer then shows Batman attacking GCPD officers. This makes it clear that Batman may not be focusing on stealth all the time and that the cops are aware that the Batman myths are real (or at least they do now). The question is, however, why is he attacking police officers? Perhaps he’s there to take out some crooked cops. The film seems to be centered around Gotham City’s corruption, after all.

There are very brief shots of a Batman vs. Catwoman fight, but after the tussle, there seems to be a moment of understanding, especially given Selina’s facial expression. It may be safe to assume their relationship might be similar to how it is in the comics. 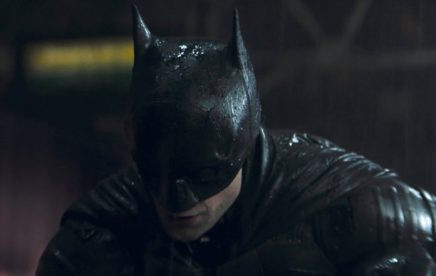 Batman beats the crap out of a goon who thinks attacking him was a good idea. It’s actually pretty satisfying to watch. It showcases a little of how Batman’s combat style will be in the film, which is a mix between skillful countering and brute force. One of the other gang members asks “Who are you supposed to be,” to which Batman replies with “I’m vengeance.” Any fan of Batman the Animated Series must have felt the nostalgia hit after that one. His “Batman voice” sounds like a simple tone change similar to Michael Keaton rather than the scratchy Cookie Monster voice that Christian Bale used, but it’s tough to base that off of two words. It’s not clear if Batman killed the gangster, but it’s doubtful since he was just punching him off camera (a lot).

The Batmobile seen in the trailer looks like a fancy engine slapped onto a standard car. This is definitely an early version of the Batmobile as it undergoes countless changes and upgrades to become the Batmobile we expect Bruce to have.

This is a great trailer, as it gives us enough information to get excited without showing us too much of the movie. The Batman is set to release October 2021, which is still pretty far away. Luckily, we were able to get this early glimpse at the Matt Reeves directed film.