Godzilla: King of the Monsters Review

Godzilla is one of the most iconic monsters and characters of all time. There are 35 Godzilla movies and several TV series, books, and video games. The kaiju even has his own star on the Hollywood Walk of Fame. Godzilla has always been a fun franchise to experience and has left a massive footprint on pop culture.

Godzilla: King of the Monsters smashed into theaters earlier this year, making it the third American-made Godzilla film and the second in Warner Bros.’ monster movie universe (alongside King Kong). I was a massive fan of 2014’s Godzilla despite there being a lot of criticism for the titular giant lizard not having much screen time. Godzilla: King of the Monsters set out to rectify that shortcoming. Let’s look closer at whether this latest installment lives up to the gargantuan name that is Godzilla or if it smashes all hope of a modern version being comparable to the classic monster flicks.

The kaiju action in Godzilla: King of the Monsters is absolutely incredible. Every blow from one monster to another is felt. The giant monster fights are choreographed in a way to make them feel like giant UFC fighters, but with super powers. It felt like what would happen if two real beings duked it out. Every action scene is an exhilarating thrill ride.

For giant motion-capture characters, the monsters still convey a lot of emotion. They obviously never speak, but there are times you know exactly how they feel or what they want to communicate. There are a couple of scenes where King Ghidorah’s multiple heads dispute over what to do, like one wanting to lick some freshly-fried corpses while another wants to go on the attack. Another moment in the movie shows Godzilla standing over a group of the main human characters on a submarine. He looks at them with an expression of understanding that he does not need to attack.

An element that allows movies like 2014’s Godzilla or Pacific Rim to stand out over other monster movies is heart. Sure, these movies have big action and bigger monsters, but they still find ways of making us feel for the characters. Godzilla: King of the Monsters is no different. The action is a lot of fun, but there are still moments where you feel for the main family and their struggles to stay together after loss. There are other beautiful, heartfelt moments throughout the film like Dr. Serizawa coming face to face with an injured Godzilla to help him after everything Godzilla has done for the planet, or the sacrifice that Mothra is willing to make to protect Earth. 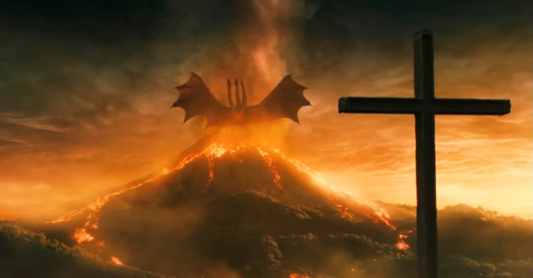 Something that the classic Japanese Godzilla movies, as iconic as they are, were unable to do was really show the scale of the monsters. We often see human characters out in the real world, and then it cuts to people in rubber monster costumes surrounded by model cities. Sure, this makes them appear larger, but it’s nothing like seeing humans standing alongside of the monsters like we get the chance to do in Godzilla: King of the Monsters. This movie made the kaiju feel like truly awe-inspiring creatures and a true danger. It makes one wonder how humanity would really act if these titans existed.

Adding to the feeling of real danger is the amount of titans featured in the movie. Not only were there the four central monsters from the classic movies, Godzilla, Mothra, King Ghidorah, and Rodan, but there were a lot of other titans stomping around and wreaking havoc around the world. This was fun for a handful of reasons. For one, the sheer amount of kaiju made it feel like the world was about to end. It also added some new names to the Godzilla lore, like Behemoth and Scylla, which is rather exciting. More kaiju are always welcome to this expansive canon. The amount of monsters also means that this movie universe can go in a lot of possible directions. Either the ones seen here could appear in more films, or more original monsters could be introduced in the future. Because these side-monsters were fresh faces, that means there’s still a lot of room to see other classic Godzilla foes, such as Baragon, Destroyah, or Biollante, in future installments.

Perhaps one of the best elements of this film is how the filmmakers stayed true to the themes of the classic movies. Much of the plot centers around the idea that humans are destroying the Earth and that we are the problem. This is the same idea seen in many old school Godzilla movies. Godzilla originally attacks humanity to put a stop to nuclear pollution. The environmental themes are more obvious in Godzilla vs. Biollante and Godzilla vs. the Smog Monster. In most of the movies, the idea is the same. We are harming our planet and these titans are either an effect of it or they want to put things right. I’m happy they got these themes right in Godzilla: King of the Monsters. It shows that it was made by true fans of the original movies. 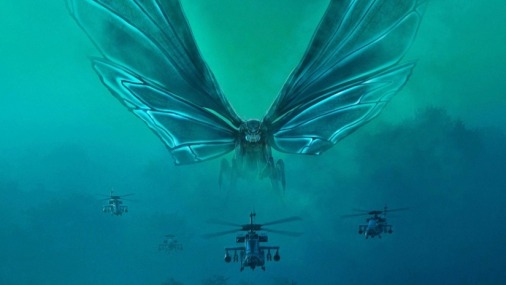 In any big blockbuster action movie, the special effects need to deliver, and Godzilla: King of the Monsters is no different. The effects are nothing short of astounding. The facial expressions on the monsters’ faces, each energy blast from King Ghidorah or Godzilla, and every explosion look completely real. Each scale on King Ghidorah or hair on Mothra can be visibly seen. There’s also some great attention to detail on the monsters, like Mothra having body features based on several kinds of insects.

The music is certainly another strength of the movie. Some updated versions of classic Godzilla scores are featured in the film, like Mothra’s theme or Godzilla’s iconic theme. These updates are more than welcome. This particular version of Godzilla’s theme music makes the character truly feel like a god. The music that plays while Mothra is often seen is beautiful and matches how the filmmakers want the audience to view her character.

The kaiju fight scenes in this movie are every bit exciting. However, most of the times that a giant monster is on screen, the view of them is obscured by a blizzard or rain, or it’s so dark that it’s difficult to see them. It gets frustrating as the movie goes on. It would be fun if they had that happen during the first fight or two to build up the epic action a bit, but there are even times during the final battle where the monsters are obscured by smoke or rain. There are some instances where you are able to get a good glance at the titans, and they look incredible when you do, but it’s not quite enough.

The human villains have an interesting motive. They want to unleash the titans in order to help the Earth heal from the damage humanity has done to it. They want the giant monsters to do their thing because they saw that San Francisco was reclaimed by nature after the events of 2014’s Godzilla. They’re right that humanity is destroying the planet, and they are right that we should coexist with the titans. Even the main human hero characters agree with that. However, their way of going about it is really stupid. Unleashing a dozen kaiju on the Earth will just kill every living person. There would be no coexistence. What makes them think these giant monsters other than Godzilla or Mothra would spare them for the sake of coexistence? They are completely convinced that they will be safe from the destruction, which doesn’t make any sense.

As much as I did like the side monsters like Behemoth and Scylla, they are barely in the movie. I get that Godzilla, Mothra, King Ghidorah, and Rodan are the monsters who are actual characters, but I still would have liked to see the side titans a bit more. They are only there to serve as a plot device to show that there are other titans out there and to show that titans tend to obey an alpha. Their amount of screen time is painfully small and I really wish we got to see them a little more and know more about them.

When Godzilla finally finishes off King Ghidorah, he does so in an explosion with the help of Mothra’s energy. When the smoke clears, one of King Ghidorah’s heads it hanging out of Godzilla’s mouth, making for an incredible visual. However, it left me wondering how that would even happen. How would King Ghidorah’s body disintegrate but not the head? How would Godzilla have the bottom of the neck in his mouth and not the head itself? Did the head fly through the air for Godzilla to catch it like that, or are they implying that Godzilla also ate the body? This is really nit-picky, but it was a strange enough scenario to happen that it caused my immersion to break.

There are twin women in the movie whose ancestors studied Mothra closely. They are clearly used as a reference to the fairies who watched over Mothra in the classic Toho Godzilla movies, which I thought was a nice touch. It further proves that this film was made by fans of the classic stories.

There is a post-credits scene which reveals that one of the monsters in this movie will potentially appear in the next one, Godzilla vs. Kong. One might be confused as to how the character will return, but fans of the older films might have an idea as to how it will play out.

Godzilla: King of the Monsters is a welcome addition to the long legacy of the Godzilla franchise. It offers exciting kaiju action, the best effects ever is a Godzilla movie, and themes similar to the classic films. Despite being primarily about the giant monster fights, it still has a lot of heart and mostly great storytelling. The amount of monsters joining the battle gave it a similar epic feel to Godzilla: Final Wars. However, there are a couple of major issues with the movie. The view of the monsters is obscured way too much for a monster movie, and the human villains’ plan is especially stupid.

Despite there being some big flaws, Godzilla: King of the Monsters offers a lot of fun for fans of the classic movies and newcomers to the kaiju franchise. Seeing this movie made me want to rewatch some of the older films and got me extremely excited to see Godzilla vs. Kong next year.