Pixar is an animation studio that has been known for creating whimsical stories filled with emotion. They have had a couple of misses, but most of their films can easily be considered some of the greatest animated movies of all time. Their most recent film, Onward, is set in a modern high-fantasy world featuring two teen elf brothers on a magical quest to find an artifact that will allow them to spend one day with their late father. It was unfortunate enough to be in theaters when the current Covid-19 epidemic began and was sent to Disney+ early. Does Onward whisk away its audience the way Toy Story or Up do, or does it fail to conjure the same magic? Let’s journey forth to find out.

The premise of Onward is a fun and unique one. Bringing classic fantasy elements into the modern world is an original enough concept and allows for creative imagery. It’s entertaining to play with the idea of how our everyday world would be different with elves and magic, or how something like Lord of the Rings would be with cars, high school, and themed family restaurants. The explanation as to how such a world exists, that these fantasy beings developed technology to compensate for how difficult magic can be to learn or use, is pretty well-thought out and actually makes a lot of sense.

Like many previous Pixar films, Onward gets pretty emotional. It’s not just toward the end of the story, like is the case with some other movies. There are scenes throughout the beginning, middle, and end that caused me to tear up. It’s certainly worth something when a movie is able to hit someone that hard. The audience can easily feel for each of the characters and what they are all going through. The film makes one think about their relationships with their parents and with their siblings and what those relationships might mean to them, which is rather powerful for one movie to do. It’s solid proof that maybe certain relationships may be more important than we typically think.

The interactions and relationships between the different characters is one of the most enjoyable aspects of the movie. This is especially the case with the two main brothers: Ian and Barley. We get to experience them grow together and help each other discover various things in life they are looking for. One of the other outstanding relationships in the film is between Laurel and Corey. This oddball duo also helps each other grow and helps to show each other what is most important to them. They also play off of each other in creative and humorous ways. Perhaps the most intriguing relationships are the ones between Ian and Barley and their father. We don’t get to experience any of it from their dad’s perspective, so we gradually learn about the relationships, or the lack of which, from the boys’ points of view. These bonds between characters help craft an overall beautiful tale.

Despite Onward being such an emotional movie, there are still laughs to be had throughout the story. Banter between characters, high-speed slapstick moments, and even some darker humor all lead to some pure hilarity. You and your kids will surely laugh together during this one! 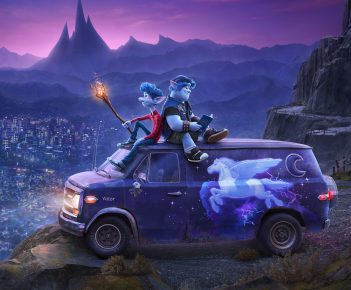 There are some exciting twists and turns throughout the film that allow for some fun surprises, but there is one major twist toward the end that was especially thought-provoking. It may divide audiences, but I actually thought it was quite interesting. I won’t spoil anything, but I will say that the story shifts to reveal what the movie is really all about. Some may feel frustrated by it, but I personally feel as though it’s an incredible and original way to make an audience think about the plot and think about things in their own lives.

Tom Holland, Chris Pratt, Julia Louis-Dreyfus, Octavia Spencer, and the rest of the cast all prove that they are outstanding actors even when they aren’t on screen. Their voice acting is surprisingly great. It doesn’t just sound like celebrities blandly reading lines like in Trolls or some other recent animated films. Each actor brings a lot of emotion and personality to their character.

Even though Onward offers some original and creative ideas, the movie is focused on a cliche road trip plot that we’ve seen time and time again. If you watch a movie like Road Trip and then Onward, you’ll see several of the same tropes and plot points used. It makes the movie feel a little less original.

With the world being the way it is, with magical beings and themes existing in a more modern world, there would be certain things that are different. For instance, the fairies have to fit several of themselves on a single regular-sized motorcycle, a gnome has a difficult time reaching the handlebar of a lawn mower, and a centaur has to fit in a standard police car. In this world, I feel as though there would be vehicles and tools made to fit these different types of fantasy creatures. They wouldn’t all be made to cater to humans, which may not even exist at all.

Something that is more noticeable and annoying early on in the film is that whenever Ian and Barley are met with an obstacle, there happens to be a spell that is conveniently perfect for their situation. It eventually pays off later on, but it feels random and a little too convenient that there is a spell for every little thing, including ones that have not been introduced or foreshadowed at this point.

This one is more on the nit-picky side, but it bothered me a little while watching the movie. The cops have the strangest and most unrealistically convenient timing when tracking down Ian and Barley. They are usually too many steps behind to catch up, which makes sense for the most part. However, when Colt Bronco calls in for backup, his backup gets to his location almost immediately, as if they teleported there. Their timing was always too convenient for the plot and was only used to create an extra threat to the protagonists’ journey.

During the end credits, there is a song written and performed by Brandi Carlile titled “Carried Me With You.” It matches both the adventure and the emotional tones of the film while also being a powerful song in general. I’m willing to bet it’ll get a Best Original Song nomination at the Academy Awards next year.

The two protagonists, Ian and Barley, are voiced by Tom Holland and Chris Pratt. Both actors are famous for playing characters named Peter in the Marvel Cinematic Universe, as Holland portrays Spider-Man (Peter Parker) and Pratt plays Star-Lord (Peter Quill). Both Marvel Studios and Pixar are owned by the same parent company: Disney. It’s an interesting coincidence that two Disney Peters are the protagonists of this Disney/Pixar movie. 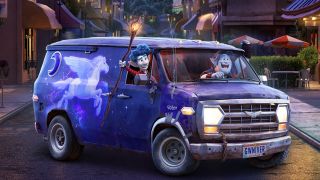 Being a high-fantasy movie, there are obviously some ideas that stem from the world of Dungeons & Dragons. Not only is that the case in Onward, but there is literally a tabletop RPG that Barley plays and is an expert in. It’s technically not D&D due to legal reasons, but it might as well be. This game, “Quests of Yore,” is where Barley bases much of his ideas throughout the story. There are many elements in “Quests of Yore,” like the spells and the leveling up system, that are heavily inspired by Dungeons & Dragons.

Onward is a riveting and whimsical quest with big laughs and intense, relatable emotion. It showcases unique and realistic relationships while taking the audience of a fun fantasy adventure. It does suffer from some road trip cliches and certain elements being a little too convenient. Plus, there is a bit of a twist that might divide audiences. However, it’s still an entertaining and heartfelt family adventure movie that proves that Pixar can still pump out unique ideas. It’s definitely an ideal movie to watch with your brother, your father, or your Dungeons & Dragons party.