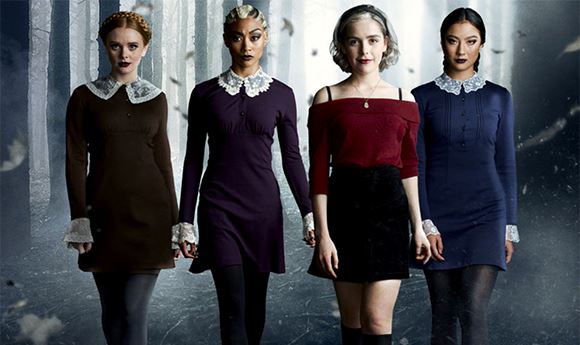 The TV streaming giant known as Netflix offers many fantastic original series and movies. They have created quite a few shows that have become entertainment staples, like Stranger Things, Ozark, The Umbrella Academy, and even multiple series based on Marvel Comics characters like Daredevil and Luke Cage. One of the elements these shows have in common is that they have relatively short seasons. Most cable TV shows often run up to about 22 episodes per season, but a lot of these streaming service series only offer between 8 and 12 episodes. This is usually good for these shows, as it’s just enough to tell the story with little to no filler. Plus, it allows larger budgets per individual episode since it’s not scattered throughout 22+ episodes. However, there is one Netflix series that could use at least somewhat longer seasons to tell its story, and that’s The Chilling Adventures of Sabrina.

The season lengths of The Chilling Adventures of Sabrina are 11 episodes in Season 1 (which includes a holiday special), 9 episodes in Season 2, and 8 episodes in Season 3. Season 4 is set to also include only 8 episodes. Similar to other modern TV dramas like Stranger Things or Arrow, it follows a formula in which each season tells a single full story that is a part of the overall story of the series. This formula totally works and is a fantastic way of telling multiple stories with the same characters while also keeping the audience captivated. We get to see a long-lasting story that lasts several seasons, but by breaking it up into smaller stories, we don’t get tired of watching.

However, despite The Chilling Adventures of Sabrina being an outstanding show, they haven’t been giving these season-long arcs enough time after the first season. Season 1 allowed a perfect amount of time to introduce the characters and the story, set up the world-building, and focus on Sabrina’s struggle between her average teen life and her Satanic witch life. Season 2 featured a story primarily about taking down Lucifer so that Sabrina and the rest of her coven can have more freedom, but it also included a particularly brief subplot about angels swooping down from heaven to hunt witches. It also included various romantic subplots, a rivalry with Father Blackwood, and a few reveals about Sabrina’s parents.

Season 3, which first released on January 24th of this year, has been the shortest season yet and has the most going on in it. Sabrina competed in trials against Caliban for the throne of Hell, she took up the responsibility of fetching souls to bring to Hell, Nick coped with having Lucifer trapped inside his body, a carnival of Pagans put a plan in motion to have the Earth overrun by plants, Lovecraftian old gods may be getting introduced, and several other impactful events took place. All of this happened in just 8 episodes.

Having several subplots, like seen in The Chilling Adventures of Sabrina, is fine. If anything, it’s actually preferred because it’s something that ties the whole series together. It’s exciting to see how side characters grow or love interests bloom over the course of a series. These subplots don’t usually take away from the main story.

However, having so many primary plots, especially in such a short season, tends to complicate the storytelling. The show has never felt confusing or overwhelming to watch; it has just made me wish there was a full season dedicated to exploring some of these story arcs.

Seeing an entire season dedicated to Sabrina figuring out how to run Hell and collect souls while balancing her typical high school life sounds like a fun season to experience. It could then be organically followed by a season with her competing in trials against Caliban for the throne, as he and his followers deem the way she runs Hell to be subpar. The Pagans arriving set on the destruction of all living beings other than plants interferes with the balance between Earth, Heaven and Hell, so seeing Sabrina tackle that next as Queen of Hell would be interesting as the following season. Unfortunately, each of these were mushed together into one short season, giving each arc just a couple of episodes worth of focus.

Each of these stories are original, entertaining, and interesting. Alas, the folks behind the show decided to rush through each arc instead, preventing them from breathing and reaching their full potential. I’m certainly not saying that they should have been dragged out longer than necessary with annoying filler. There is absolutely enough content to have each individual arc receive its own season so it doesn’t feel like an afterthought on the way to another conflict or plot. At the very least, the stories should be stretched out over the course of more of these short seasons to receive an appropriate amount of focus time. Until then, even though the show is unique and compelling as is, certain storylines that have a lot of exciting potential will continue to not get enough time to feel fleshed out.